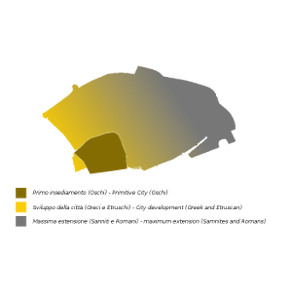 Pompeii has ancient origins: in 7th century B.C. one of the first Italic people, the Osci (or Oscans), permanently occupied the area situated at the foot of the Mount Vesuvius and next to the river Sarno and it constituted the first conurbation and maybe they also gave it its name (pompe in Oscan language that means number five, it probably refers to the number of the original villages).

Thanks to its favorable geographical location, Pompeii soon became an important crux of the road traffic between north and south, and of the port traffic between the sea and the more internal areas, to the point of being considered as a valuable conquest by the powerful adjacent States.

At the beginning Pompeii suffered the Greek hegemony (Cumae settlement, in the VII century B.C.) and, in the period between 525 and 474 B.C. it suffered the Etruscan hegemony: in this lapse of time, even if it was never won, the city could enjoy a sort of political autonomy, only being subjected to the road traffic and port control.

When it felt again under the Greek authority, the Samnites, a population from the interior region of Abruzzo and allied with Romans, conquered the city in 425 B.C.

In 310 B.C, when the Romans declared war against the Nucerians, the Pompeiian Samnites stood up for the latter, who, after the first victory, were forced to surrender: although governed by the Samnites, Pompeii fell under the rule of Romans.

During the 3rd and 2nd centuries B.C. the city had the biggest expansion, with linguistic and institutional autonomy.

In 89 B.C. the Pompeiians rose up against the Romans because of their exclusion from Roman citizenship, but they were defeated by the army leaded by General Lucius Cornelius Sulla and in 80 B.C. when the city lost all forms of autonomy, it became Colonia Cornelia Veneria Pompeianorum.

A significant boost to the Romanization of the city was shown when Emperor Augustus came to power in 27 B.C. In 40 B.C. a crisis period occurred just before the end of Caligula’s empire, which cause is still unknown but it seemed to be resolved when Nero came to power.

Under Emperor Nero, in particular until 59 A.D., city life was calm and quite: however when a violent riot between Pompeiians and Nucerians, occurred in the amphitheater, caused many victims Pompeii was debarred from holding any similar gathering for ten year.

The terrible earthquake of 62 and the violent eruption of Vesuvius in 79 A.D. put an end to Pompeii.

During this extended period of time, every invader brought their tradition and art to Pompeii, which interesting traces lasted until today and constituted a heritage of inestimable historical value. 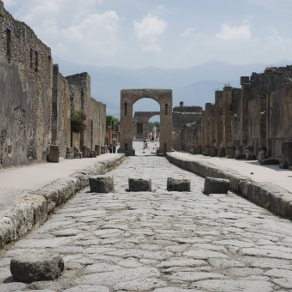 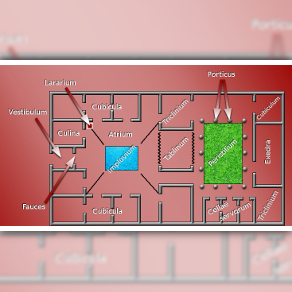 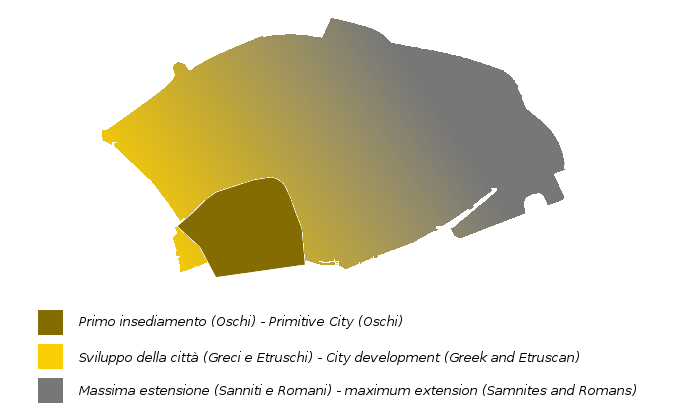